No shit? I say: profound shit

I don’t quite get it. How is it important whether the person with the suitcase that contains the red button to start the nuclear holocaust on our planet shares a delusion with millions or billions of other people? 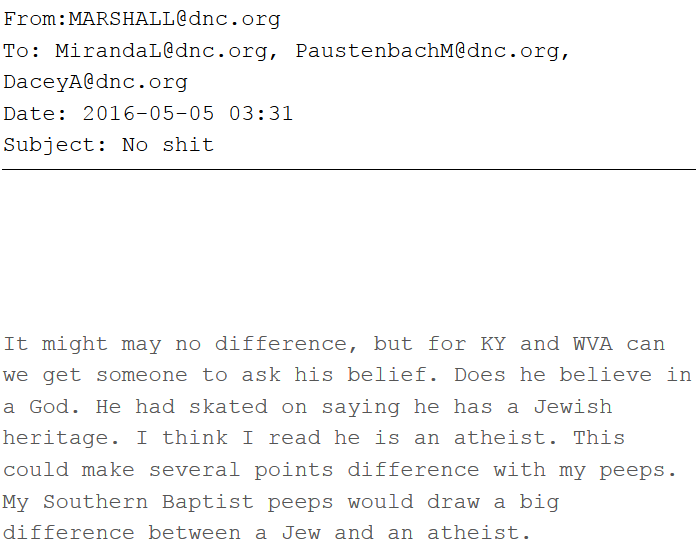 The email is quoted as per Wikileaks here and the mysterious “he” is Bernie Sanders.

Well, in fact I’d say it’s quite important that such person doesn’t have any delusions. I’d rather that a POTUS has no superstitions that might affect my life on the other side of the big pond.

But in the above quoted email the sentiment seems to be the opposite. For some reason unknown and certainly incomprehensible to me it is important that a POTUS believe in the one Sky Daddy™. At the very least the email doesn’t even leave the room for polytheistic belief systems, given the use of “God”, as if there was one … or if there were, only one.

What’s the rationale here? I mean it’d be fine with me if the folks that believe in a bronze age deity handed over all the technology invented since the bronze age and carried on their lives in absence of the inventions that so much contradict their faith. So Latter Day Saints (Mormons) may pick bronze age or 19th century. Way to go! But I doubt that would happen. Instead religious systems are very creative in bending their own rules as can be seen with the observance of shabbat1.

As if murdering without due process, but in the name of a deity, somehow makes the murder more just. That disgusts me. And so, presumably, hundreds of Afghans, Pakistanis, Yemenis and other people are disgusted by that “logic”. Even though many of them would contend that there is one “God” and they know of course that theirs is the one true deity.

PS: Of course Sanders responded officially that he’s no atheist. Oh well. Because what could possibly be worse than for someone holding the most powerful position in on of the most powerful nation states on our planet to have no shared superstition?

This entry was posted in Atheism, EN, Thoughts and tagged usa. Bookmark the permalink.